I few years back I was taking a service at a home for the elderly. I read the words from the New Testament: ‘the greatest commandment is love God, and the second is this: Love your neighbour’. Without warning, an elderly woman at the back of the room shouted ‘I don’t love my neighbour’. I didn’t know what to say – I looked at the nurses and they looked at me, but the moment of silence gave the woman the opportunity to add: ‘and, listen ’ere vicar, if you knew her, you wouldn’t love her either’!

I remember walking away from that home for the elderly and thinking that woman had taught me something – that it’s easier to preach about love and compassion, than to put it into action in our lives. I can imagine the reaction of those who were listening to Jesus when he told them to love God and love others. They would be struggling to keep the 613  commandments in the Jewish Scriptures. So imagine their delight when Jesus comes along and says, actually, all they really need to worry about are two commandments – love God and love each other. It sounds so easy! 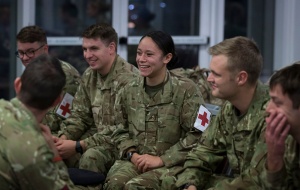 A few days ago I was reading about the 225 military medics – doctors, nurses, and consultants – who are going out to join other humanitarian and health workers in fighting Ebola in West Africa. These are amazingly brave people, putting themselves under so much risk to stand alongside suffering people. Of course, they will be given so many rules to keep – washing their hands, using disinfectant on surfaces and handles, wearing protective suits, using sanitizing gel, and so on. But, in reality, those rules are the easy part when compared to the fact that they are going out there in the first place. That was the “love” bit of the equation – that they are willingly offering their lives to go out to places of war, disease, or suffering, to stand alongside injured or sick people. The “love” bit, not all the rules they keep, is the really difficult bit of the equation.

n reality, all of us, if we put our minds to it, could keep a set of rules. But our call as Christians is not simply to keep rules or law, or even to be good or act kindly towards people, our call is love other people. My love for my wife is not about me keeping her rules (although she does appreciate when I hang my bath towel up and put the toilet lid down!). My love for my wife is not even about me being nice to her (although she does appreciate the occasional flowers and compliments about her clothes!). Love demands something far deeper and more sacrificial from us. It asks us to stand alongside the other person in all their joys and all their suffering. And Jesus asks that we treat all people, even strangers or people we don’t like, in this way – to treat all people as they were in our own family, as if they were our own brothers and sisters. That’s the real challenge to all of us who are baptised. We’re not promised an easy life in baptism, as even Jesus himself, who lived a perfect life of love, ended up being crucified. But showing love and compassion to all around us, however we might be feeling, however they might be acting, that is what our faith is all about.

In that passage that I read in the home for the elderly, we get our answer, and God answers very simply. He says, “I want you to love”. He says “forget your detailed rules and commandments, I simply want you to love”. That’s a terrifying answer to the terrifying question. It’s terrifying because it’s difficult – it’s hard to show love to people who have hurt you, it’s hard to show love to people who have acted terribly, it’s hard to stand alongside others in their most heart-breaking and difficult moments, it’s hard to prioritise our relationship with God with so many other demands on our time, and it’s hard to put love for the environment and other living creatures ahead of our own selfish wants. But although it’s a terrifying answer, it’s also an amazing answer. It’s an answer that can inspire us to live such great lives, and can bring individuals, communities, and societies so much hope and new life. “What does God want from me?” we ask. And God simply answers, “I want you to love”.