Most of us look forward to Christmas each year. A recent poll revealed why people continue to love the festive season. The reasons were varied – time with family, giving gifts, the food and drink, catching up with old friends, watching children opening their presents, good television, and so on. The “real meaning” of Christmas, however, was positioned lower down in the list. For many, Christ is slowly being relegated from the Christ-mas season.

In a promotional video for their internet podcast, which has been downloaded over 300 million times, the comedian Ricky Gervais quizzes his radio producer and friend Karl Pilkington on the significance of the nativity story. Pilkington’s answer is revealing and reflects an increasing trend in society’s attitude towards the festive season: ‘[The nativity] is not important. It’s so not important this story. I don’t need an old story… I could do without it. If someone said we’re getting rid of it, I’d go “all right”’.

Those of us who are Christian, though, know very well that the nativity is not simply an ancient story from a dusty old book. The incarnation is about experiencing Christ now. A wonderful consequence of the ‘Word made flesh’ is that Jesus is still involved in a dynamic relationship with the world. After all, God did not only reside in human form for a fleeting thirty-three years, but is still engaged in every part of our everyday lives.

The BRF Advent book for 2013, Real God in the Real World, encourages us to use our festive season to recognise Christ in the world around us – not only in our prayer and worship, but also in the beauty of nature, in the friends and family with whom we celebrate the season, and in our everyday activities over the Christmas period and beyond.

Each day we are given a thoughtful consideration of a Bible passage. This will explore the passage through poetry, literature, film, or a lively anecdote, as the scripture is brought to new life. Each day also includes a practical application of the passage’s reflection, to aid us in discovering Jesus’s presence over the festive season. Thus, as we journey through Christmas together, we will start to open our eyes, ears, and hearts to Christ all around us, and, as we do, we will find that the Word is still becoming flesh today!

Real God in the Real World can be purchased directly from BRF, from Amazon, or from your local bookstore. It can be used as for personal reflection or, by using the group discussion questions at the back of the book, it could be used in an Advent group.

To have contributed one vote towards yesterday’s historic “yes” vote for women bishops in the Church in Wales feels special. I was there five years ago when the Church in Wales rejected women bishops, and I saw the pain that so many were feeling at that time – many tears of sorrow and incredulity were cried. Yesterday, though, it was tears of joy that were flowing at the Church in Wales’s Governing Body. For someone like me, it was a happy and jubilant day, which had affirmed an important biblical principle – “there is neither Jew nor Gentile, slave nor free, male nor female, for you are all one in Christ Jesus” (Galatians 3:28). For many of my colleagues, though, it was the pinnacle of many tireless decades of praying and campaigning.

The debate yesterday was remarkably gracious – with both sides contributing with warmth and humility. Anglicanism, after all, has always been a broad Church, and we already have many different and contrasting voices within our theological and liturgical spectrum. Yesterday’s debate showed that we were no different to any other family – a motley crew of diverse folk held together, most of the time at least, by love and respect.

My own brief contribution to the debate seems a distant memory by now. However, a number of friends and colleagues have asked that I reproduce the words that I spoke from the podium. Below are therefore those words, reprinted in the knowledge that my friends and colleagues in the Church of England might be inspired by the fact that, at the moment that I spoke them, I truly believed that the Governing Body was going to vote “no” and that I was to return back home disheartened again. As it happened, the Bill went through effortlessly, with members of all shades of theology (evangelical, Catholic, traditionalist, liberal, charismatic) voting conclusively for women bishops:

“Yesterday, we heard about the rise in the number of children attending our churches. But once they hit their teens, it’s then they really start questioning. I coordinate a group called The Journey in the diocese of Llandaff, for 16 to 24-year-olds. A few months ago, we held an event called Grill-a-Bishop, and Bishop David Wilbourne came to be grilled by a group of over 30 young people. The question of women bishops was the very first issue they wanted to discuss. These young people came from different churches from across the diocese and hailed from a range of theological backgrounds, but all of them seemed to be of the same opinion – that NOW is the time for women bishops.” 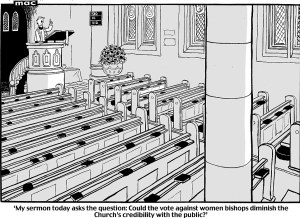 “As an outgoing chaplain at a large University and as coordinator of The Journey, I felt I had to try to say something about a group who aren’t represented here today. To the majority of teenagers and young people, continuing to say “no” to women bishops, especially as we already ordain women priests, is seen as nonsensical and backward. It is something an increasingly unbelieving age-group finds unbelievable.”

“And I personally find it unbelievable that I could be going back for this year’s Freshers Week at the University, for my last few weeks as chaplain there, to tell the students that we didn’t pass this Bill. It is certainly true that women bishops are not the answer to our problems as a Church, BUT it is also true that our problems will get a whole lot worse if we keep saying “no” to women bishops.”

I’m writing this blog post from deep in the Bavarian countryside. I love visiting my wife’s family here in Germany – the weather is as warm as the welcome, the food is delicious, and I get to write this blog while looking out at deer grazing in a beautiful garden. Despite all this, I still feel rather disconnected with those around me, as I speak almost no German and many people in this small village speak almost no English. Last night I even found myself speaking Welsh to my mother-in-law, thinking that would get me understood better. It didn’t work, of course!

In reality, of course, disconnection with the world around us is something with which we all struggle at different times of our lives. We do speak the same language as our family, friends and neighbours, but whether they truly understand us is another question. “Can you see the real me?” screamed Roger Daltry at his doctor, mother, and priest on The Who’s 1973 Quadrophenia album. 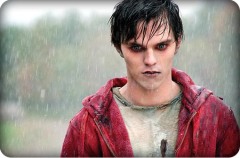 Quadrophenia, later made into a successful film, is a rock opera about a disenchanted young person. Teenagers, of course, often feel misunderstood and alone, as they try to make a connection with an often unforgiving world. The film Warm Bodies [2012] recently became a huge hit with young people. On the surface, it is surprising that a film about zombies would prove so popular with teenagers. In the first 100 words of the film, though, the film-makers make an immediate connection with twenty-first century teenagers through the narration of a teenage zombie, named “R” (played by Nicholas Hoult), who is himself one of the ‘undead’:

“What am I doing with my life? I’m so pale. I should get out more. I should eat better. My posture is terrible. I should stand up straighter. People would respect me more if I stood up straighter. What’s wrong with me? I just want to connect. Why can’t I connect with people? Oh, right, it’s because I’m dead. I shouldn’t be so hard on myself. I mean, we’re all dead.”

This is not a condition that is unique to teenagers, of course. This sense of disconnect with each other and with the world around us is something we all feel at different times in our lives. In my book The Compassion Quest I argue that, while disconnection is a frequent feeling for us humans, freedom and redemption can be found in recognising that we are all, in fact, intimately related to each other and to the world around us. Even scientists are moving from a paradigm that sees the universe as a mechanical system, made up of a disconnected collection of parts, to a paradigm that regards the world as an integrated whole. With approaches such as systems thinking and quantum theory, contemporary science offers a shift from an emphasis on ‘objects’ to the recognition that ‘relationship’ is integral to the world around us.

Likewise, Christian theology teaches that relationship is also what God is really about. God is relationship in his very core, which is what the complicated doctrine of the Trinity is all about, and he wants us to enter relationship too – with him, with each other, and with the natural world around us.

Both our faith and contemporary science, then, suggest that relationship and oneness are at the heart of the created order; by ignoring this we miss not only the reality of existence but also the richness of life. In the film Warm Bodies, the teenage zombie “R” is brought to life, quite literally, when he makes a deep-seated connection with a human being. Love brings him out of his sleepy, lifeless cocoon. For Christians, love is also integral to rebirth and new life – God’s love for us, the love shown to us by others, and the love with which we bless others.

“Why can’t we connect with people? Oh, right, it’s because we’re dead. We shouldn’t be so hard on ourselves, though. I mean, we’re all dead”. The next time we feel that way, we need to remind ourselves that our alienation from God’s world and from the people around us is something from which we can break free. By doing so, we are born again – viewing the world and everything in it with fresh eyes. As Thomas Merton wrote, when he himself came to this liberating realisation as he walked down a street in Louisville, Kentucky: “I was suddenly overwhelmed by the realisation that I loved all these people, that they were mine and I theirs, that we could not be alien to one another, even though we were total strangers. It was like waking from a dream of separateness.”